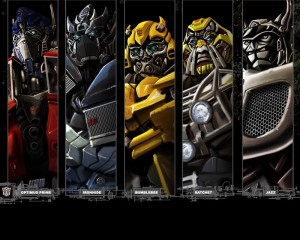 I watched the pilot for the original Transformers animated series, which premiered in September 1984. The name of the pilot was “More Than Meets The Eye“. In the episode we are transported “many millions of years” before the present (1984) to a planet called Cybertron. This is a technologically advanced planet populated by shafeshifting machines. The planet is being ravaged by a civil war being fought between two sides- the Autobots and the Decepticons. The Decepticons are said to be greedy, evil machines bent on total domination; the Autobots, on the other hand, seek only to stop the Decepticons and return peace to their beloved planet. The energy sources on Cybertron are depleted, so both sides leave the planet in search of alternative sources with which they can fuel their ongoing battle. They end up crash landing into a volcano on Earth, where they lay in wait for four million years until the Volcano erupts, somehow switching their power switches back on. The Decepticons regroup decide to mine Earth for all its energy supply, then return to Cybertron to create a weapon capable of dominating the universe. The Autobots take it upon themselves to stop the Decepticons, and protect life on Earth at all cost. With this, the stage is set for the rest of the series.

The old view that children should learn from the past and prepare for the future is inevitably subverted in a consumer culture where memory and hope get lost in the blur of perpetual change. (course packet page 290)

The world which the Transformers inhabit, Cybertron, could be the pictorial representation of the word fantasy in the dictionary. It is a distant planet, tucked into some obscure corner of the universe. The beginning scene of the animated series’ pilot involves a period of “space travel” as an introduction- no doubt meant to communicate to children the remoteness of this faraway land- isolating them from their worldly surroundings while simultaneously engaging their focus with measured buildup. As we meet the Transformers, they are amazing marvels of engineering. Otherworldly aliens that, oddly enough, when shifted resemble vehicles we normally encounter here on Earth. The sight of a car speaking in the first scene, then later empathizing with his fallen comrade quickly remove all semblance of familiarity. These are not vehicles like we have on Earth- these are much cooler. As we shift scenes from battling on Cybertron to intergalactic space travel and later to mid space battle, the characters somehow end up on Earth. The scenes on Earth are deliberately staged in areas where humans would not inhabit: the desert, open ocean, a volcano. Even when humans appear in the series, they are tiny, thoughtless, impulsive beings. Their role on the show is much like a mouse or a dog would be portrayed on a present day sitcom- our function is to be weak, frightened lifeforms dependent upon the autobots for our salvation. There is no tie in towards learning from the past. Absolutely no mention of how children should prepare for the future (unless calling down forty foot robot guardians from space counts as a plan- pretty sure Newt Gingrich would approve). There are no lessons taught, to be quite honest. Even though the show takes place in our world, it strives to maintain its “other-worldliness” by reducing mankind and its achievements to a mere side-show- “ants” that the glorious Transformers may step on at their will. The show is about one thing and one thing alone- promoting the Transformers toys. The real world has no relevance here…