The Dangers of T.V. 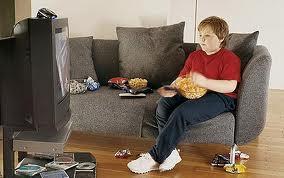 Television and its effects on children have become a moral panic that has lasted for decades. The question is whether or not the moral panic has evidence to show that t.v. is bad for kids? The American Academy of Child and Adolescent Psychiatry recently came out with an article telling parents about the dangers of watching too much television. It states that “by the time of high school graduation, they will have spent more time watching television than they have in the classroom”. This is an interesting statement because not everyone watches the same amount of television. It states that t.v. can take time from other activities and can expose kids to things that they shouldn’t see. They give parents ways to help prevent kids from the dangers of t.v. by telling them to watch t.v. with their kids and by limiting how much t.v. they can watch. This article is clearly written by psychiatrists to help parents dampen the effects t.v. can have on children.

In “The Veldt” by Ray Bradbury the children become obsessed with their nursery and kill their parents when they try to take it away from them. It is very extreme but can show a relation between kids and their love for television. The article written by  The American Academy of Child and Adolescent Psychiatry talks about how much time kids spend watching t.v. and the kids in “The Veldt” start to spend more and more time in the nursery. Spending more time watching t.v. can become addicting and the thought that a child’s love for t.v. can become stronger than their love for their parents is a scary thought.

Tags: anxiety, children, Television
From: Reading Journal
No comments yet