The Lorax: Environmentalism Then, Commercialism Now 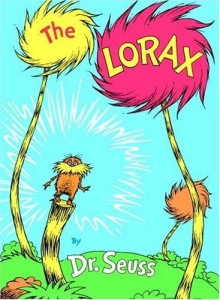 Susan Linn of the Huffington Post wrote an article recently about the “slew of corporate cross-promotions” making an appearance thanks to the new film The Lorax, an adaptation of the famous Dr. Seuss children’s book.  Linn criticizes the use of the new film to promote commercial products such as HP computers, Seventh Generation diapers, and Mazda SUVs.  The Lorax is a children’s book that was published in 1971 and originally taught a lesson in environmentalism.  The use of this book’s popularity to create a film that in turn fuels commercialism has caused a controversy; Linn explains that the environmental message of the book directly conflicts with the creation and distribution of products using the film and the Lorax as selling points.

This article nicely complements Chudacoff’s piece on commercialization.  The merging of a “‘backstory’ of fantasy with a product” is exactly what’s happening with The Lorax (pg. 180).  Advertisers are taking advantage of a beloved book and using its big budget movie deal to sell products.  Linn talks about how “[m]arketers routinely exploit children’s emotional connection to media characters to sell them on practically everything.”  Chudacoff discusses exactly this issue and how it emerged in the 1950’s through the medium of television.  In his own article on toys and commercialization, Cross writes that the “defeat of reformers’ attempts to prohibit toy ads on television” contributed to the growing number of children consumers (pg. 291).  Based on the Huff Post article, it’s obvious that manufacturers have, as Cross states, “formed alliances with makers of children’s movies, TV cartoons, comic books…” to sell products with the Lorax as their middle man, something the “real Lorax” would have had no part in (pg. 293).

Tags: Chudacoff, consumerism, Gary Cross
From: In the News
No comments yet