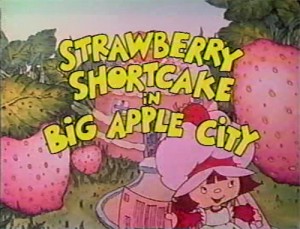 This episode does go along with many of Cross’ arguments because the towns and buildings are that of a fantasy world, often made out of common desserts. Snail mail in this world is literally delivered by a snail, and airplanes are simply butterflies. This is a world in which the sun talks and when bad things are thrown in Strawberry’s way, such as the Purple Man catching her airplane (or butterfly) with a butterfly net, happy thoughts can save the day. Many things such as this, obvious signs of “moral tags” (296), are evident in the episode. These moral tags were meant to justify the PLC’s and make them seem better for children. Other examples include quotes such as “Never say never” and “Be good losers. Victory lies in the struggle, not in the prize.” The various friends made by Strawberry in the episode affirm the idea that “friendship” toys for girls were being made instead of home-making or mothering toys.

While many of Cross’ points and arguments were shown through the Strawberry Shortcake episode, there were also a few references to the real world. The Big Apple in the title refers to New York City and the bake-off is held in Times Square. One of the friends Strawberry makes is even from London. Some things from the real world stay the same, such as video cameras and tv’s. The Strawberry Shortcake world is not entirely fantasy. One part of the episode that somewhat defies one of Cross’ arguments is the lack of gender roles in toys. A friend made in “Spinach” (aka Greenwich) Village, Lemon Meringue, is a model and is constantly primping and saying how pretty she is. However, this is the only clear gender role shown in the episode.

Overall, the episode seems to reflect many of Gary Cross’ arguments and doesn’t necessarily negate many of them. While I definitely thought it had no educational value, due to the moral tags, it could be said to have some kind of merit. However, I believe that this PLC, although not necessarily all PLC’s, was mainly for the purpose of consumerism. Viewing this one episode, I agree with Gary Cross, although after viewing more of this show, or perhaps some other PLC’s, it’s possible I could change my mind. I sincerely hope all PLC’s were not as horrible as this episode of a girl named Strawberry Shortcake.