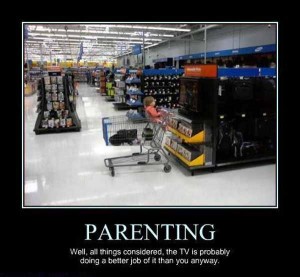 “Imagine if there was an extra adult in your home parenting your child. Every day from dawn to dusk, this person would give your kids information on everything from school work to more personal issues, like dating and relationships. And you have no say what they told your child.”

Angela Ardolino creates this image to explain the role, that she believes, television has taken on in the home. In her article, “Embracing media influence on Children,” Ardolino is arguing that parents do not understand how big of an influence the media has on a child. At the time of adolescence, she states, children form a separation from their parents and look to the media for guidance. What these children see on television and in ads tends to form their values and interests. She argues that this influence is mostly negative. Ardolino ends by giving media tips to help parents and encouraging them to help their children choose positive media role models.

Angela Ardolino is the editor of Tampa Bay Parenting Magazine, Founder of Miami Children’s Theater, and an expert in honest parenting. While she does not have children herself, she has so much experience with children and with the study of children and parenting. From her articles on her webpage, she allows the reader to get a sense of what kind of person she is and what her beliefs are. She writes about popular media influences on children today and her responses to these influences range from mildly liberal to mildly conservative. She reaches out to all parents with varying parenting skills.

This critique of the effect of television on children is similar to Ray Bradbury’s critique in “the Veldt.” In his story, Bradbury creates an image of the nursery taking on the role of the parents and all of the children’s behaviors come from what they create in the nursery. Both Ardolino and Bradbury have the same critique of television acting as a parent for children and they both portray this media influence as negative by showing the parents being killed in the end of “The Veldt” and by explaining that children who see tobaocco ads are more likely to take on the habit of tobacco. However, Bradbury explains the nursery more as a baby sitter, whereas, Ardolino portrays the television as an actual guardian that effects all aspects of the child’s life. I think that Ardolino’s critique stems from the greater variety of TV shows, today, than were available in the 1950’s when “The Veldt” was produced. The wide variety of what is shown on TV today makes way for more influences in every part of the children’s lives.

Whether the TV is acting as a babysitter or a role model for children, many critics argue that the media is becoming a problem. As seen in Adolino’s articles as well as in Bradbury’s story, the TV is showing a negative influence on children. Their interests, hobbies, and values are all being formed by what they see while they are left in front of the television. By presenting their arguments, Adolino and Bradbury leave the idea of whether or not there needs to be an intervention in what today’s children are watching up to the parents.

Tags: entertainment, Parenting, Television
From: Reading Journal
No comments yet