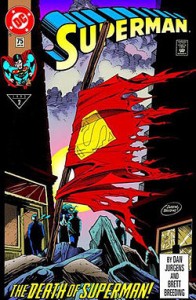 Superman dies so that you may live!

Way back in the early nineties, DC Comics decided to jump-start sales of their Superman comics by killing the Man of Steel!  I was ten years old, and not too familiar with comics.  I knew Superman, of course, and Batman and Wonder Woman and Spiderman, etc., but mostly through cartoons and movies, not actual comics.  This time was also long after the moral panic Hadju describes in his book, long past Dr. Wertham and his Seduction.  In fact, because of those days of moral panic and the overall dismissal of comics as a valuable medium – the resulting lack of preservation of comics – that old comics were seen as valuable collector’s items.  That carried into the present and provoked collecting crazes across the comics landscape.  Superman 75, the Death of Superman – which to me was simply a comic displaying Superman falling in the line of battle, protecting his city from the hulkish Doomsday – was a prime collecting event for others (mostly adults).  They assumed such a historic comic would be very valuable later.  Lock it in a safe for thirty years, then make a fortune.  This did not take place, unfortunately for most collectors.

In both the moral panic of the fifties, and the collecting craze of the nineties, the adult world collided with the adolescent to transform the sales of comic books.  During the moral panic, sales slumped, especially of the highest selling crime and horror comics.  This allowed abysmal and silly “children’s” based superhero comics to rise to the fore and dominate the medium for the next several decades.  With the collecting craze, however, the entire medium exploded in sales.  This was mostly due to the perception that comics of any type would be valuable someday.  Most didn’t take into account the laws of supply and demand.  Simply, the comics of by gone eras were treated poorly and were rarely preserved in mint conditions, hence their value as commodities based on the relatively small supply of cherry comics.  Modern day collectors immediately bagged comics and put them away from harmful sunlight, hoping to preserve the form and content of the pages.  But because this practice was done en masse, the books still have little value today.  It would take another comic book death march perpetrated by parents, harping on their kids to get rid of the silly things, for comics of the nineties to rise in value.  This may still happen, but probably not.

Again, what was to me a seminal experience of idol destruction, was for others an opportunity to make a buck (the comics industry equally guilty in that conceit).  The comic that was mostly meant for kids again broke through into the adult world and caused sales to sky rocket.  The unfortunate result, however, similar to the moral panic of the bygone era, was a huge sales slump following shortly after.  Collectors eventually got wise to how inflated the comics market had become and left it overnight.  This caused many comic companies to go out of business, and seriously wounded the bigger companies.  I still love Superman 75, especially the final blows both Superman and Doomsday administer to one another, mortally wounding each.  Superman dies as the savior of Metropolis and the world.  But this one comic almost killed the industry, too.  Again, the creators allowed adult interest dictate the format of their industry, and sales plummeted eventually as they had during the moral panic of the 1940s and 50s.