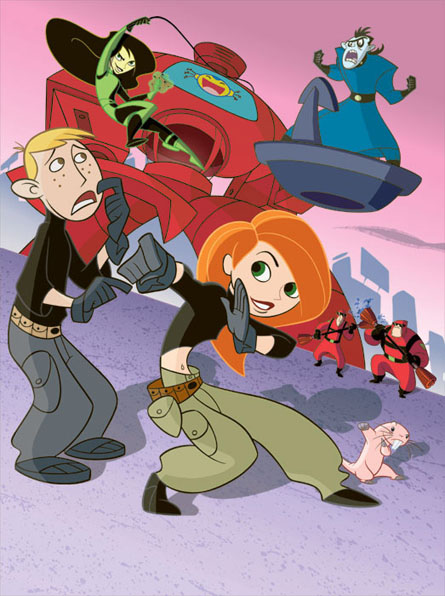 When I was younger, one of my favorite cartoons on the Disney Channel was Kim Possible.  This show started airing in 2002, and it was very innovative in its presence of strong female characters. Unlike the typical female protagonist, Kim Possible was a confident and assertive teenage girl who fought crime on a daily basis under the motto “I can do anything”. She was also a straight-A student and captain of the cheerleading squad at her high school.

The other strong female character was her rival Shego, who assisted many of the villains on the show, particularly Dr. Drakken.  Shego, with her amazing fitness and agility, was a master of martial arts as well as a skillful saboteuse.

The primary male characters, on the other hand, were portrayed as being incredibly smart but clumsy, and often in need of rescue (which I consider to be a nice shift from the usual “damsel in distress” that usually accompanies most female characters).

The innovation is in the freedom of Kim’s and Shego’s roles as female characters, a freedom that has been historically more common among male characters in movies, books, TV shows, and any other form of storytelling. As Elizabeth Segel describes in her essay, the stories in boy’s books were of action and adventure, whereas the stories in girl’s books were more focused on morals and were restricted to the domestic setting. As if that were not enough, “the restrictiveness of woman’s role as prescribed by girl’s books was also embodied in the female characters (when there were any) of boy’s books” (73). Because of stories like that of Kim Possible, the restrictions set on female characters have slowly been dissipating.

This show was especially meaningful for me because it provided a much needed female hero, one who was just as strong and independent as the traditional male hero.

Tags: Childhood, Elizabeth Segel, gender, Television
From: Archive of Childhood
No comments yet