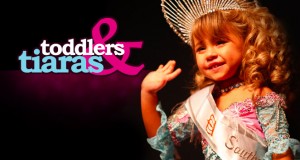 What is the worst thing you have ever seen on television?  If you asked me, or Charlotte Trigg’s from People Magazine, it would have to be TLC’s Toddlers and Tiara’s.  This television series follows the behind the scenes action of what really goes on in a child’s beauty pageant.  In the pageants there are girls of all ages.  You are never left wondering when the next temper tantrum is going to be because the show is full of them. Even though, if I were four years old I’m sure I’d be throwing a temper tantrum the size of these poor girls hair as well.  Prepping and preparing for these pageants are a full time job for mothers and daughters alike.  The girls spend hours practicing routines and singing songs to get them ready for the big day.  They are also put through the ringer with the amount of make up and hair appointments the mothers drag them along to.  What I find most disturbing is the mothers that whiten their daughters teeth, or take the daughters to get waxed.  Why anyone in their right mind would take a four year old to get their eyebrows waxed is completely insane.  To me, a great example of the type of exploitation of kids is in the case of Shirley Temple; whose parents exploited her talents and cuteness to captivate the country during the Great Depression.  Shirley was forced to spend long hours on set, nearly seven days a week filming, so that her parents could reap millions.  In John Kasson’s “Behind Shirley Temple’s Smile” he states how one of her directors scolded her for playing, saying “This isn’t play time, kids,” and later Temple recalls him saying “it’s work.” As a child, what is important is just having fun and being a kid, not being on set all day trying to please their parents by making them look good, or by making money with their acting.  How do we expect our kids to grow up, if they are not spending time with other kids, learning and developing their minds to become adults.  This type of exploitation has to stop because it’s not doing anyone any favors.

Tags: exploitation, Television, Toddlers and Tiaras
From: In the News
No comments yet