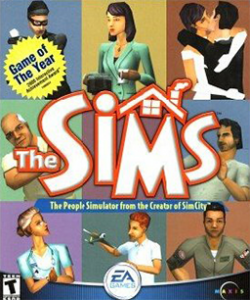 The first Sims game released in 2010

Growing up, I enjoyed playing video games that made me feel like I was watching a movie. That is, I appreciated games with a specific plot that allowed me to participate. The Sims is an interactive computer and video game that basically allows players to simulate daily activities of people in a suburban household. It was developed by Maxis for Windows in 2000 and cost about $60. The game has since been released on MAC, PlayStation, Xbox and GameCube.

To summarize the game is relatively simple. Players, first, get to design each member of the family. You choose their name, skin color, clothes, face, ect. You then spend time in “build mode” designing every detail of the home from size to wallpaper to windows. Once the structure is complete, the player enters “buy mode” and spends money purchasing furniture for the home. Finally, you can enter “live mode” where you essentially become the Sim. You control everything your character does including going to work, going to the bathroom, eating, and interacting with others. The characters also work on building skills such as reading and creativity as well as making sure their needs are met such as satiety and sleep. As the player, it is also your duty to maintain your finances and take care of children if you choose to have them. Many people would say that this sounds like a game that could teach children life skills but there has been some controversy involved with this game over the years. When the game was first released, it was not well censored.

When players develop relationships with each other, it is possible for that connection to progress into a sexual one. In the current version, when this occurs, the act is blurred out so nothing can be seen, However, in the original version, this censorship did not exist. There was also a recent “bug” that caused this suppression to fail. The culprit was likely one of the people who have been asking Google, “How do I take the censor off?” Apparently, there is a “Nude Patch” that players can download to be able to permit their Sims to bear it all (for whatever reason). Needless to say, this is the sort of loss of innocence in the common child is exactly what Stearns describes when he says, “…parents worried deeply, if not always effectively, about their degree of control over the entertainment their children received, and about the appropriateness of the entertainment offered.” (Course Packet p. 6)

“Players can allow public nudity, fondling of partners’ buttocks while kissing (both of the same and opposite sex), characters burning to death, and even polygamy (a male can marry numerous females, but a female can marry only one man). Could this game be teaching sexism?”

Appropriateness aside, The Sims continues to maintain popularity from girls and boys of all ages. The have since released multiple Sims continuation games including House Party, Unleashed, Hot Date, Vacation, and Superstar. The franchise has sold more than 100 million copies and I’m not ashamed to admit I am the face of 3 of those!