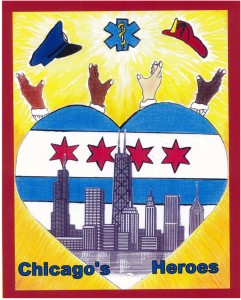 February 8, 2012, the story of 15 year-old Herbie Pulgar appeared as a leading headline on yahoo.com. After participating in the Chicago citywide art contest, seeking a winning sticker design to be placed on all city emergency vehicles, Herbie Pulgar had been given the honor of having his design (featuring the Chicago skyline as well as the “Helping Hands” of the different Chicago Heroes) as the winner of the art contest. Earning the opportunity to not only personally meet the mayor, but also the winnings of a $1,000 bond, the design and its creator- the freshman at a high school designed for emotional and learning disabilities, seemed to be an inspiration to Chicago as a whole.

However, apparently upon closer examination, former Chicago Police Superintendent Jody Weis concluded “When you add the heart symbol, you add the hand signs, you add the hand placements — you can see where there might be a perception that this could be in some way reflecting on a particular gang” (nhpr). The accused similarity to the gang sign of the Maniac Latin Disciples, appeared to be enough evidence to revoke Pulgar’s design and have it replaced by the runner-up in the contest.

As Herbie and his mother continue to insist that the design was purely of creative thought, alongside a testimonial given by the boys art teacher in the video clip (click picture for video), one is tempted to ask if this “gang sign concern” comes from a legitimate place, or one of moral panic. “In a city where gang violence terrorizes some neighborhoods, Chicago City Clerk Susana Mendoza says Pulgar’s sticker design had to go, regardless of the boy’s intent.” Just as Pulgar’s image has caused a potentially unintended uproar, Sterling North’s critique of early comic books seen in The Ten Cent Plague by Hadju stated that early comic books were “cheap political propaganda” when most  early comic books were generally apolitical (pg 41). At a time where the country is viewed as being so sensitive to the misconstruing of every questionable image/remark/action, are the authorities of Chicago right in trying to prevent moral panic? Or overstepping the thin line?

Tags: Chicago, Image, Moral
From: In the News
No comments yet