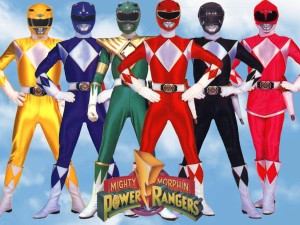 When I was a kindergartener, there was nothing cooler than the Mighty Morphin Power Rangers TV show. The Power Rangers, which debuted on Fox in 1993, were a gang of teenagers who defended planet Earth from invading aliens by using sweet martial arts moves and teamwork.

The six Power Rangers were defined their colors: there was Jason the red one, Kimberly who wore pink, Zack in black, Trini would be in yellow, Billy donned blue, and Tommy was the green Ranger. By displaying the Power Rangers in such a manor, the show’s producers easily enabled children to pick their favorite character based on their favorite color.

But there was a catch. If you were a boy in my kindergarten class, you could not like the Pink or the Yellow Ranger. Those two girls characters were reserved for girls to like only, although I do recall girls being allowed to like the boy Power Rangers without penalty.

This gender separation of selection of favorite character reminds me of Elizabeth Segel’s article, “‘As the Twig is Bent…’ Gender and Childhood Reading.” In the article, Segel describes children’s literature and the division of stories between boys’ and girls’ books, and also the readiness of girls to read about male characters and the unwillingness of boys to read about females (Segel, 73).

Laura McGrath also noticed the separation of the boy and girl Power Rangers, especially in the opening credits that would air before every episode. She describes, on her blog, how the male characters would be portrayed doing physical actions such as karate kicks or wrestling aliens, while the female Rangers were seen stretching and doing gymnastics.

I do not believe that the Power Rangers were sexist or gender separatists, rather it was the children themselves who created the separation. Every child was free to chose whichever Ranger they wanted to be their favorite, but it was the fear of being ridiculed in the classroom that restricted the choices.