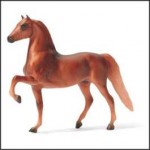 As Gary Gross said “parents expected playthings that imitated current adult roles. [1]” With this mentality, there is no doubt why growing up with a farming father I was showered with agriculture animal toys. My favorite ones to play with were the plastic toy horses. With them, I would imitate everything my father would do in real life. I pretended to feed them by laying them on the grass so they could eat or dipping their head in the water so they could drink.

To me the rocking horse was pure amusement, but its creation was intended to provide additional benefits. Dating as far back as the 17th century, where King Charles I of England rode one as a child, toy horses were used to advance child development. The rocking horse would provide a form of exercise that helped build balance and coordination in the child. Additionally, it embedded in them the basic skills of riding a horse-mounting, proper seating and riding, holding on, dismounting. The model horse became so popular, adults practiced their use as well. Knights in the Middle Ages rode on wheeled horses to improve their jousting techniques just like children practiced their riding skills on rocking ones[2]. Unknowingly, I was gaining more than enjoyment out of my toy horses. I was improving my physical skills and preparing for the future role I was to hold in the farm. If I showed I could took good care of my toy horses, it displayed I had the knowledge required to take care of a real horse. 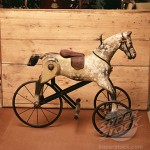 Initially, the rocking horse was made of materials such as barrel,  wood and cloth[3]. Due to the abundance of the material, the rocking horses were very affordable. Rich and poor alike could own one. For this reason, it became such a popular toy everywhere. Today toy horses are still abundant and being created in additional materials such as plastic, metal, and glass. Unlike the old days where the rocking horse was simply the bareback figure of the horse, today they closely resemble the real ones by being equipped with saddles, horseshoes, and riders gear. Children now are more prepared than ever to learn everything necessary to become great horse owners.