Gary Cross and his claim that parents over-indulge their children during the Christmas holidays in order to express their wealth to outsiders is definitely accurate.  Although I do so long to believe that Christmas is truly revolved around the spirit of giving, it is difficult not to notice the emphasis that has been put on what is being given.

Any other time of the year, it is seen as “spoiling” your child if you give them every item that they ask for. However, during the Christmas holidays, parents are able to shower their children in lavish gifts without anyone questioning whether or not the child really needed the item in the first place.  Even if families don’t necessarily have the means to pay for everything their children want, they are more than willing to max out a credit card 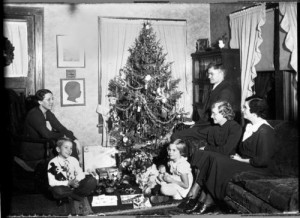 or save all year just for this one particular day. Competition not only arises between kids comparing their Christmas gifts, but one of the bigger and maybe even more worrisome competitions is between the parents.

Advertisements such as the Kay Jewelers commercials are perfect demonstrations of how the media portrays the idea that women, especially mothers or wives, expect diamonds in some form or fashion during the holidays. These advertisements make the diamonds seem as if they are accessible to the everyday family. The same kind of advertising can be directed toward the younger generations as well. Best Buy’s “Game on Santa” commercials showed a mother buying her children Kindles and digital cameras. When children are exposed to this kind of advertising, how could they expect any homemade toy?

Now, with all of that being said, I do still believe that Christmas is still largely centered around spending time with the family, and I do not agree that this family time is ONLY for parents to pamper their children with presents. However, I think it might be time for American families to rethink the importance and meaning of the Christmas holidays.

Tags: children, christmas, Gifts
From: Reading Journal
No comments yet