Ever since I was a child, one of my favorite shows was The Big Comfy Couch. I distinctly remember I loved the show so much that my parents even bought me the doll Molly, the sidekick, which was priced around $19.99. Every day I would sit on my couch and pretend that I was sitting on “The Big Comfy Couch” with Molly sitting right next to me. The Big Comfy Couch was aired from 1992 to 2006 and was a Canadian children’s television series. Cheryl Wagner created this television series about Loonette the Clown and her doll Molly, who solve their everyday problems on this big comfy couch. Each episode focused on a different aspect of movement that children were encouraged to partake in, such as stretching, jumping, or dancing. 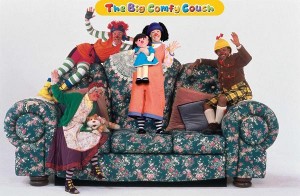 In Gary Cross’s article entitled, “Modern Childhood, Modern Toys” he discussed how gender had a tremendous affect on the toys presented to either young boys or young girls during that time. He says, “Girls’ playthings were almost exclusively dolls and their accessories” (49). This was presented in the show The Big Comfy Couch by the doll Molly which appealed to young girls. It showed that a doll can be your best friend, which was represented by the relationship between Loonette, the clown, and Molly.

Through the continued watching the television show every day, seeing the Big Comfy Couch started to become a routine. Whenever the afternoon rolled over, my mother would always know to turn on the television for me. Just as in Gary Cross’s article, he says, “Toys did not cease serving the needs and imagination of adults, but they began meeting adults’ ideas about the needs of children” (47). Therefore, my mother knew what had then interested me, and through modern technology it became a source for parents, like my own, to entertain their children.

Tags: Childhood, Gary Cross, Television
From: Other
No comments yet