by Taylor Giordonello on February 3, 2012

An article in The Sun by Bella Battle, announced that the couple who kept their child’s gender a secret for five years have revealed that the child, Sasha, is a boy. They kept Sasha’s sex a secret from teachers, friends, and family members. The parents, Beck Laxton and Kieran Cooper, kept their home television-free, only allowed him to play with “gender neutral” toys and alternated boys’ clothes and girls’ clothes. They reasoned that typical gender roles create stereotypes that prevent a person’s real personality from shining through. For the first five years of Sasha’s life, he was referred to as “The Infant”. His parents decided to publicly reveal his gender when he entered grade school and when the school told them the child would have to use the designated restroom for boys or girls depending on his sex.

Laxton explained, “I just want him to fulfill his potential, and I wouldn’t push him in any direction. As long as he has good relationships and good friends, then nothing else matters does it?” 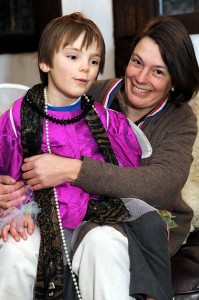 Beck Laxton and her son are laughing together while showing off Sasha’s “gender neutral” apparel.

In our class discussion, we conversed much about gender roles and popular culture. We debated, for example, why young boys may not feel comfortable reading stereotypical “girls books” while young girls do not feel the same pressure. “Books are labeled, as strictly as school lavatories, ‘Books for Boys’ or ‘Books for Girls’.” (Course Packet, P. 165) The same can be argued for toys and clothes, as we learned in our class discussion. In today’s society, when we see cargo shorts, sneakers, and baggy shirt, we tend to think male, whereas we associate dresses and the color pink with the femininity.

The article concludes by stating, “As a child grows they develop their own independent sense of self that will include their own individual gender identification.”

I believe this is extremely vital to mention. Although I do understand the point these parents are attempting to get across, I believe their son may not benefit quite as much as they hope. In today’s society, as sad as it may be, he will undoubtedly have a difficult childhood outside his own home. He will likely have a difficult time assimilating in school and in many social situations until he reaches an age where he has been better socialized (outside of the home) to develop his own sense of self. A child must have the ability to choose who they want to be. Although these parents are trying to keep their son from being forced one way or the other, they also restrict certain “extreme toys” such as Barbie and G.I. Joe. This impedes Sasha from being able to make his own decisions about what to play with and, thus, the person he wants to be. It is imperative for children to be exposed to books, clothing and toys that are geared both towards boys and girls, however, in this extreme circumstance, Sasha is likely to be confused and may even have a more difficult time developing his own sense of identity due to his parents’ seeming repulsion for it one way or another.

Tags: children, gender, parents
From: In the News
No comments yet