As a child, one of my most memorable toy favorites would have to be the Hot Wheels toy line. Hot Wheels was made in 1968 by American toymaker Mattel. This would be the same toymaker responsible for several of American childhood favorites such as: Fisher price, Barbie Dolls, American Girl Dolls, and various board games.  The typical, current Hot Wheels toy vehicle could cost anywhere from $5-$50; with older, and more classic models, sometimes be worth much more money. This particular brand of toy cars was created after toys had become an acceptable means of entertainment for the American child, and not necessarily a personified teacher of practical jobs associated with rigid gender roles.

The fact that I am a female who took a particular interest in playing with Hot Wheels challenges a common gender stereotype perpetuated in toy lines: only men drive fast cars and big trucks. This plays into the discussion held during Week 2 of class when talking about the history of toys in America. Although, I did play with Barbies as well, I liked Hot Wheels and other toy cars much more.  My interest was also fostered by my mother who, as the mother of an only child, was more interested in me being happy than in what was that create that happiness.

In the Cross article Modern Childhood, Modern Toys, the author discusses in further detail the heavy distinction made between girl and boy toys throughout the course of toy history. One of the most current examples being the fact that nearly all girl toys are made in the color pink. Associating pink with femininity, and essentially saying that only girls should be allowed to play with THIS toy. 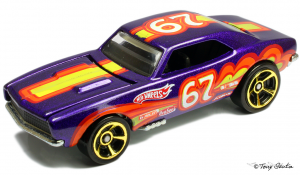