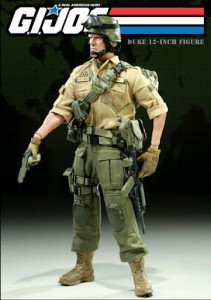 At a young age boys are easily intrigued by action and aggression, two general characteristics that often can be considered when describing what it means to be a man. One toy during my own childhood that embodied both of these attributes was the G.I. Joe. In 1964 Hasbro began production of the G.I. Joe line, creating four different variations of the toy to represent the four branches of the military: Action Army, Action Navy, Action Pilot, Action Marine. The fact that boys didn’t want to be accused of playing with dolls, a very effeminate pastime for girls, Hasbro made it a point to call the toys “action figures”. Today they retail for about twenty dollars, but back then they were inexpensive. These action figures weren’t like the little green army men portrayed in the movie Toy Story which could be so easily destroyed by demented toy torturers like Sid. G.I. Joes were tough. Measuring a foot in height, these action figures were harder to break, allowing boys to be more “playful” with their toys. Not only were they tall in stature, they were also bulky—G.I. Joes sported big muscles in order to carry big guns and heavy equipment—appealing to children’s early notion of “bigger is better”. In class we discussed how boys who play with toys specifically targeted for male children could possibly affect their ability to absorb a female’s perspective later on in life. I personally disagree with this statement as it regards G.I. Joes because action figures are aesthetically very similar to dolls played with by young girls as well. G.I. Joe has even launched a female version of the action figure, G.I. Jane, to target girls.

Tags: Childhood, Dolls, gender
From: Archive of Childhood
No comments yet