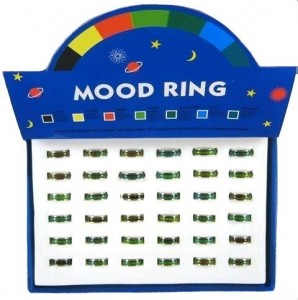 The year was 1975 and I was 12 years old when Mood Rings were popular. I remember wearing mine to junior high school and comparing the color to the rings of my friends.  According to the brochure that came with every ring, you could determine the mood of the wearer based on an interpretive chart.  Everyone wished for a violet-blue ring which signified happiness and romance.

Josh Reynolds and Maris Ambats were  the inventors of the Mood Ring.  They chemically bonded liquid crystals in a hollow glass shell and mounted the stones into rings.  The crystals would react with your body temperature and turn colors.

The rings were sold everywhere, from gas stations to department stores.  You could get a ring for as little as five dollars.  According to blogger Mortal Journey, a million dollars worth of these portable biofeedback aids were sold in a three month period during 1975 by the entrepreneurs.  Unfortunately, they went bankrupt because of failing to patent their idea and imitators soon saturated the market.  On page 50 of our coursebook, Gary Cross credits the rise in American manufacturing and the radical transformation of marketing after the Civil War, with abundant opportunities for retailers.

According to the article by Rick Kogan, the mood ring was seen as a symbol of control for a shifting culture.  Increased self-awareness and the popularity of group therapy during the mid-70s, contributed to the craze for these rings.  The jewelry gave the wearers a chance to display their emotional state to others.  By wearing the ring, a person supposedly felt a sense of control over their emotions.  I think mostly it was a fun fad that could not be taken too seriously.

Tags: consumerism, fads, toys
From: Archive of Childhood
No comments yet