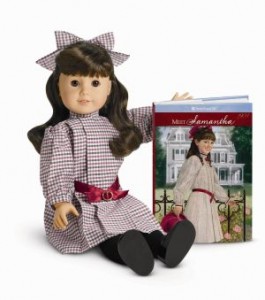 When I was 10 years-old, there was only one toy I truly desired for Christmas that year. More than anything, I wanted an American Girl Doll. Having had access to their line of books at my elementary school library, as well as my many friends who were mailed the monthly American Girl catalogues that displayed the latest accessories for your miniature pal, I was groomed to desire one of the delicate and interesting dolls. The dolls and their corresponding books series, were introduced by American Girl Company in 1986 (acquired by Mattel in 1998) with the intent of “introducing historical characters to give girls an engaging glimpse into important times in America’s past… Gentle life lessons throughout the stories remind girls of such lasting values as the importance of family and friends, compassion, responsibility, and forgiveness,” according to the American Girl website. Just as Sterne emphasizes the importance placed on play not only being entertaining, but also used as educational stimulation, the strongest selling point to the American Girl series is the fact that they represent historical eras of time. Not only are little girls combatting boredom with the dolls, but ideally, also learning historical information. As previously mentioned, the dolls are also supposed to emphasize a certain set of values to their girl consumers. According to an article in The New York Times, “This return-to-innocence approach has corporate appeal.” In 2004, the company had reached $350 million dollars in sales, and looked upon as a more suitable toy to Barbie (who ironically was also created and manufactured by Mattel.) Similar to the points Cross makes in “Modern Childhood, Modern Toys” concerning gender roles, the American Girl dolls not only emphasize the classic maternal qualities dolls often invoke, but also on what defines an American girl: responsible, compassionate, and age-appropriate.

Tags: Dolls, Play, toys
From: Archive of Childhood
No comments yet