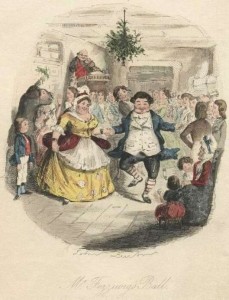 An illustration from Dickens' "A Christmas Carol" as found on gutenberg.org

In his writing, Gary Cross uses Charles Dickens’ A Christmas Carol to describe the cultural link between wealth and Christmas that was developing in the nineteenth century. Cross suggests that Scrooge was able to buy “the Cratchits joy” with his gifts (59). Due to the “emotional ties” created by gift giving in the domestic setting, family life was idolized and children soon became the face of this developing innocent façade of the nineteenth century (59). In part, this façade that the child represents is an illusion created by a parent through the act of gift giving. With a gift, a parent is able to relive their own childhood, display their “personal affluence,” and proclaim the child as a “deserving” one (59). Cross’ opinion of a child being seen as “deserving” is an idea that holds true in today’s society (59).

Using themes from A Christmas Carol as a representation of today’s society, the child can be viewed as the Cratchits, and the parent as Scrooge. A parent is willing to give “selflessly” to their child, but oftentimes has an ulterior motive of trying to prove abundance and wealth (59). Striving to provide the child with a “shower of gifts,” a parent becomes the ultimate consumer during the Christmas season (59). They become prone and privy to any inkling they might have about joy that their child could derive from their wealth and abundance of gifts. The child is encouraged to indulge and take part in the abundance offered by the Christmas season. Advertisements evoke lengthy Christmas lists and outrageous wants and desires (which are often times strewn by the media as “needs”) from the child. In this way, the child is conditioned by society to hold a certain expectation of a plentiful Christmas. The parent, on the other hand, is expected to react swiftly to the demands of the child, no matter the cost. With the evolution of Santa Claus in the twentieth century as an integral icon of Christmas, the parent finds a scapegoat for lavish spending and indulgence (60). A parent, among other parents, can appear wealthy, yet selfless, through the act of copious giving to the child; all the while hiding behind the “jolly fat man” (60).